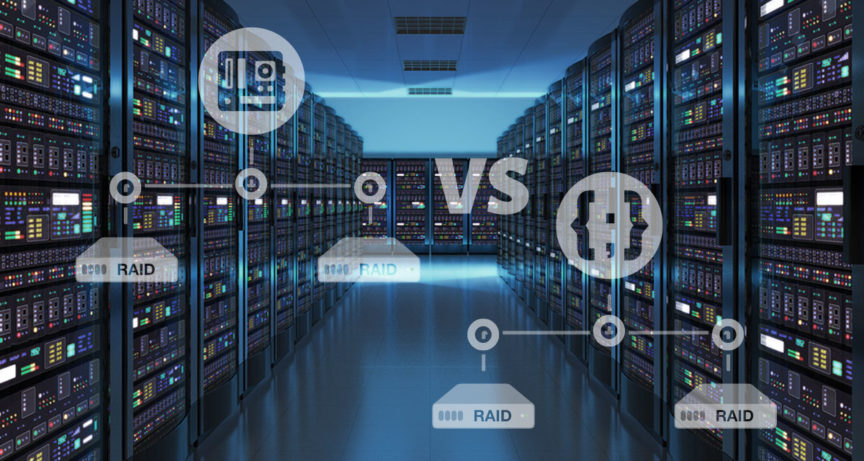 Yup. We’re still on this RAID kick (and on a ‘vs’ kick). If you missed our RAID primer, check it out here. Now that you’re familiar with what RAID is, let’s go a little deeper to figure out who wins the hardware vs software RAID battle. Spoiler alert: neither–the winner is… you! You know… because you chose the right one for you. Moving on…

It takes processing power to handle all the calculations that go into RAID operations. The more complex the RAID configuration, the more processing power needed. From a pure operations perspective, there is very little difference between hardware and software RAID. Ultimately, the difference comes down to where the RAID processing is performed. It can either be performed in the host server’s CPU (software RAID), or in an external CPU (hardware RAID).

When storage drives are connected directly to the computer or server without a RAID controller, RAID configuration is managed by utility software in the operating system, which is referred to as a software RAID setup. Numerous operating systems support RAID configuration, including those from Apple, Microsoft, various Linux flavors as well as OpenBSD, FreeBSD, NetBSD and Solaris Unix.

The winner really depends on your use case. If you’re trying to save some money (and who isn’t, really?), you’ll be using a single operating system to access the RAID array, and you are using either RAID 0 or 1, using software RAID will give the the same RAID protection and experience than it’s more expensive counterpart.

If you can handle the initial investment, hardware RAID is definitely the way to go. It will free you from the limitations of software RAID and give you more flexibility in the way it is used and the types of configurations.

What type of RAID processing do you use? Let us know in the comments.